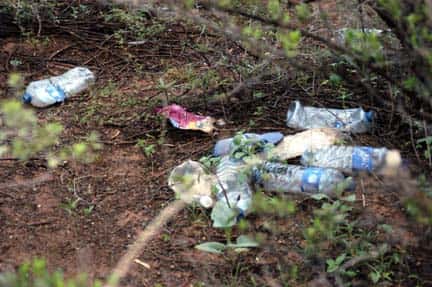 A separate tragedy is that the tons of feces and rotton food and soiled clothing is later cleaned up by local Boy Scouts.

America’s children clean these desease ridden lands only to have them soiled again and again with no end in sight. 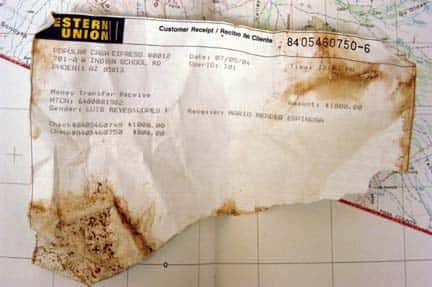 Since most of Arizona is fenced, the illegals must clamber over multiple strands of barbed wire to gain access to these rendezvous points. In many places it’s best to burrow under the fence so that passersby will not notice any deformation to the barbed wire fence line. Remember, in this part of the country a rancher’s broken fence is noticed. These burrowing places will sometimes be covered over so as to not be visible from the paved road or dug at an angle so that speeding vehicles will not gain a view of the trough just below the fence. 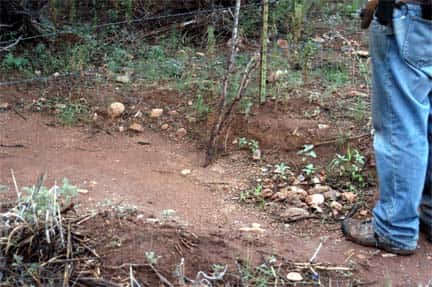 The well worn — even polished — trench used by illegals to gain access to the paved highway where their coyote will collect them and transport them to Tucson, Phoenix, or even Chicago.

The usual process requires that the illegals — 50 or even 100 at a time — will be guided over the border and then told to march along certain trails or following certain markers and then stop. Along this part of the Arizona border the San Pedro river offers a reasonable pathway from the border to these rendezvous points just south of Tombstone.

After releasing his “pollos” to clamber northward on their own, the coyote will then stop in some developed area such as the town of Sierra Vista and purchase food and drink for his charges. He will then drop this food and drink at the rendezvous point and again remove himself from the area and await their arrival.