Half way between Tombstone and the U.S. / Mexico border is the town of Bisbee. It’s an “Artist Colony” made famous by Kim Bassinger’s role in the popular Hollywood movie L. A. Confidential. Ms. Bassinger played a Hollywood prostitute doing five Johns a day who planned to someday open shop in Bisbee. From the looks of it, she did.

The citizens of Bisbee are also faced with the rush of illegal aliens and the annoying echoes of United States Border Patrol vehicles screaming through the night.

Illegals stumbling along Arizona Highways are a common sight. Usually, they are alone because they either refused to pay the coyote who brought them this far or the coyote and the rest of the pollos diagnosed the illegal had turberculosis. Many illegals can hide their turberculosis long enough to get a job making salads in some restaurant. Some simply fall over at the side of the road. Others are far more streetwise than you might imagine.

By federal law anyone who walks into an emergency room must be treated whether they can pay or not. The hospital in Bisbee has been overrun by illegals and faces bankruptcy. The Copper Queen Hospitalhas but 14 beds but has spent $1.4 million it does not have to provide medical care to these illegals. To keep the doors open the hospital has cut back on care for American citizens. That was the only way the hospital could remain open. 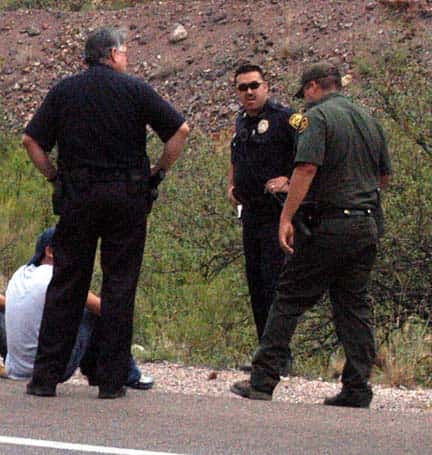 The thrill of the chase and the concomitant adrenaline rush seem to still be coursing through the circulatory system of this local officer. The sound of handcuffs zipping around wrists is a thrill he still seeks. For your safety and that of the local citizenry, it may be best to stay clear of Bisbee.