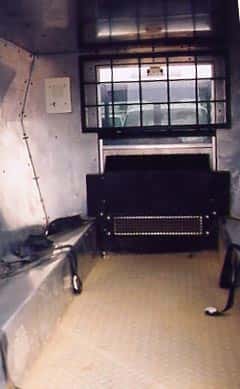 Note the pretty stainless steel interior, and the seat belts. The Border Patrol Agent driving this portable prison is protected from whatever you are exhaling by a double HEPA air filtration system (bottom center).

Now, there are enterprising individuals — who are in ever-dwindling numbers because they keep dying — who have decided that the way to NOT get caught by the USBP is to pack 25 illegals into a van and then drive the wrong way on the freeway, at night, with the headlights out.

Yes, drive the wrong way on the freeway, at night, with the headlights out …

This has proved to be immensely counterproductive. But since most of the participants wind up dead there is so little feedback to the muchachos back home telling them it was all a bad idea that they keep doing it. Of course, this is also murdering innocent American men, women, and children who are riding in the car that you hit head on. And while it is the fault of the United States government that the Border Patrol is so underfunded that they cannot protect you, the feds won’t pay your hospital bills.