There was one smart Hombre who did it the right way. He stole a tank. Yes, a real tank. A real M-60. Now when he rode the wrong way on the freeway … nobody got in his way — Ahhhhh …for long. 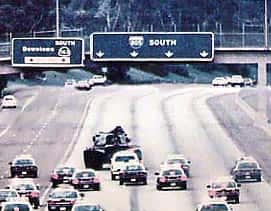 That is a real M-60 tank — stolen — and going North in the South bound lanes of a U.S. / Mexican border area freeway. You can’t pack too many illegals inside … but what a way to go!

The portable prison will transport you to a holding cell at one of the many nearby USBP offices. You will never be taken to a real Sector Office because Sector Offices are where the bosses work and they do not want you around. You will go to some “Border Patrol Station.” There, you will be placed in a green enamel painted room with a toilet. No, they do not have bars on the door. The door is simply solid steel with a window.

There is a control room and inside it is one Border Patrol Agent who looks at you intently. Three times a day a big bus will arrive and on one of its trips it will take you away.

The two main temporary holding facilities for illegal aliens caught along the southwest border are in El Centro, California and Florence, Arizona. These facilities each have about 500 beds. As many as half the beds are occupied by aliens not wanted by their home countries.

Of course, then there is a problem of what to do with this real criminal type that nobody wants. For someone to be deported they have to have a country to be deported … "to".

So what does one do with let’s say an illegal alien serial rapist who has been caught by the USBP and is now in a cell waiting deportation back to his home country of Cuba? He may have 20 rapes to his credit. His home country certainly doesn’t want the guy back. Recent liberal U.S. court decisions will soon force these "people" to be released from their cells and out onto the streets of America. Yes, because these "people" are suffering in a sparsely furnished American residential facility the liberal U.S. courts think that it would be best if we let them go. So soon there will be thousands of hardened criminals released from our jails and turned loose on America.

"Give us your tired, your poor … yearning to be free" suddenly takes on a whole new meaning.

This is what Fidel Castro did to the U.S. under our President "Jimmie" Carter. Fidel dumped the contents of his jails onto America’s shores and told us to do something with those people. Between 01 April 1980 and 25 September 1980, we received 124,776 of them.

But that was only 3,784 per day or less than one fourth as many illegals we now get every single day across just our southern border. And, remember, along our southern border it goes on for decades and millions of illegals cross our border each year.