While the USBP must stand almost unarmed guarding America’s border with Mexico, the Republic of Mexico has Mexican Federal Troops along the border to guard drug convoys.

Each year, illegal aliens enter this country from Mexico and then murder twenty five times as many people as were killed in the Oklahoma City bombing, and our Border Patrol must stand helpless at the breach.

Here we see real honest-to-goodness Mexican Federal Troops along our border near San Diego guarding a drug convoy. In the upper left highlighted rectangle you see the scouts peeking over the border through the vast open space in our border defenses — created by environmental lawsuits because a fence might hurt some lizard during mating season. In the shadows of the treeline are as many as 40 Mexican troops. At the bottom right highlighted rectangle is a U.S. taxpayer supplied Mexican Army M998 Humvee with a fully loaded .50 caliber heavy machine gun in its turret. 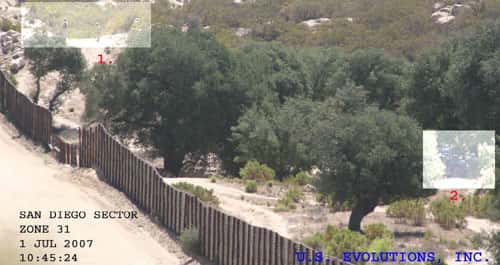 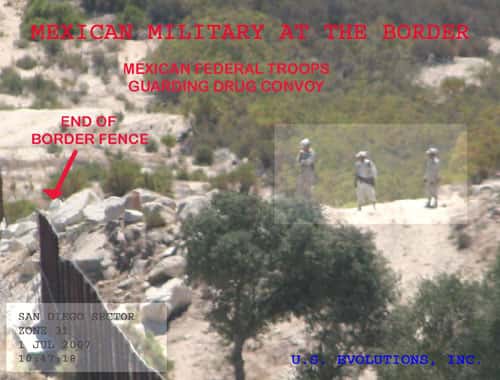 A close-up of the Mexican Army Scouts standing at the end of America’s border barrier. 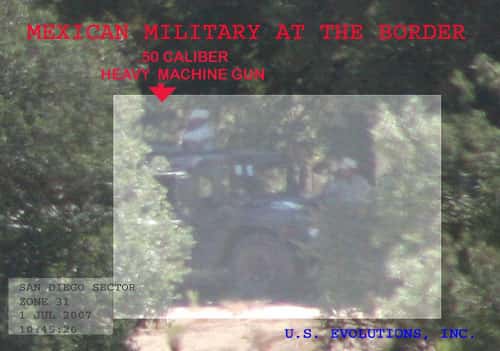 Here, we can see the U.S.-taxpayer-supplied Mexican Army M998 Humvee with the fully loaded .50 caliber heavy machine gun mounted in the gun turret.

The USBP has not a single weapon or vehicle which can counter or survive a direct hit from such a weapon. The drug smugglers are safe invading America.

You can contact your congressman by clicking the emblem: