Let’s look at two of the largest Mexican border towns to see our future. These towns are developed, have even half a dozen TV stations each, are each populated by a million people and are success stories. 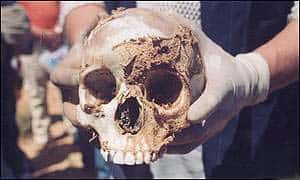 Pleasant, dusty, romantic Ciudad Juarez across from El Paso, Texas, offers us secrets we would rather not know. The “undocumented migrants” of that community have slaughtered as many as 400 young girls over the last few years just for sport. The bodies are dumped along the border in shallow graves and some of the bodies have only been found when their mummified fingers started sticking up out of the sand.

Is there more going on in Ciudad Juarez? Yes. Mexican troops have surrounded itand the hamlet of Nuevo Laredo and have brought in M-60 Army tanks to quell the violence. The 400 dead girls are seemingly just somebody’s hobby, there’s serious violence going too.

In the case of Tijuana, the actual murder rate is more than about 500 per year (San Diego, California has a murder rate of less than 100 per year). Of course, this is not the total body count. This is the number of people discovered on the street, in cars, in houses, or mysteriously plopped at Tijuana’s city dump.

The city of Tijuana actually has a higher murder body count than all of Western Europe combined, but such excitement and spice make a quick visit south just that much more interesting.

While “Chief of Police” and “thirty six years in prison” make an odd combination, they do go together quite well when they describe Police Chief Antonio Hermenegildo Carmona and the 36 years he received for aiding Tijuana’s Arellano Felix drug cartel.